10 Varieties Of Indian Breads Everyone Should Try

The National Bread Day is celebrated on the 17th of November every year. Even though most of us include some type of bread in our daily diet, we do not know a lot about bread. For instance, it might surprise many of you when you learn that Egyptians used bread as a currency showing how important bread was for them. Another interesting piece of trivia about bread is that it doesn’t have any cultural boundaries and is used in several regional ceremonies.

Breads are an integral part of the Indian cuisine. Different types of breads are served with famous Indian dishes, especially curries. There is a wide range of different Indian breads out there. In fact, different states or regions in the country have different baking styles and use different ingredients.

The pan-fried plain parathas are flaky and crispy. The Indian flatbread goes really well with most of the popular Indian dishes. The name Paratha actually comes from a combination of two words, parat and atta, which means cooked layered dough. Parathas are commonly stuffed with potatoes, paneer, cauliflower, and more.

Malabar Parotta, also known as Kerala Porotta or Porotta is a popular south Indian flatbread that is prepared with maida. Porottas are served in most of the restaurants in Kerala, Tamil Nadu, and other South Indian states. Malabar Parotta can be eaten with a wide range of different dishes that include vegetable curries, chicken curry, & other non-veg meals.

Most south Indians love Dosa. In fact, they can’t go a week without having either Dosa or Idli. Dosa is a deliciously crispy Indian bread variety that is commonly eaten for breakfast or simply as a snack. The most popular and widely loved type of Dosa would surely be Masala Dosa, a dosa rolled up with potato, spices, and onion mixture.

As most of you are aware, Chapati is one of the most popular varieties of Indian bread in our country. In fact, people from all over the country eat chapati on a daily basis. Chapati is a delicious flatbread, which is pretty similar to an Indian roti. However, the former one is more soft and then & it is served with pickles, chutneys, and curries.

Idli is a popular and widely loved south Indian bread that is commonly eaten for breakfast. Idlis are yummy, soft, and spongy discs that are prepared with rice flour and urad daal. It is made by steaming in a cooker, which is the main reason for the round shape of Idli. Idli is usually eaten with hot and spicy sambar or with a delicious chutney often made with coconut.

Idiyappam is another Indian bread that is very common among South Indians. It is eaten as breakfast with either vegetable or non-vegetable curry. Idiyappam, which is also called noolputtu is often served with sugar, milk, and coconut in several parts of Kerala.

Here is another popular flatbread that is very common in most parts of India and has a chewy texture. Naan features a unique tear-drop shape and made with white flavour, salt, sugar, eggs, and yeast. Naan is usually served hot right from the kitchen and goes well with most Indian dishes.

Roti, the flat Indian bread that is prepared with wholemeal flour and cooked on a vessel called Tava. Several different versions of roti that includes chapathi, tandoori roti, roti canai, are part of the daily diet of several Indians. The name Roti actually stems from a Sanskrit word, which means bread.

Bhatura, the popular North Indian meal and can be considered as a slighter large version of Poori. The golden brown colored and deep-fried Indian bread can be served with chickpea curry, lassi, and plenty more.

The round and yummy deep-fried Indian bread, Poori is prepared with white flour. You can see that poori is usually served with bhaji with spiced potatoes for breakfast. It is an excellent combination and something you should definitely try. 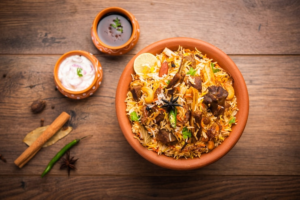 How to Make Mutton Biryani in a Pressure Cooker

Biryani is a very popular dish, and it is made in almost every part of India. It can be prepared with chicken, mutton or vegetables. 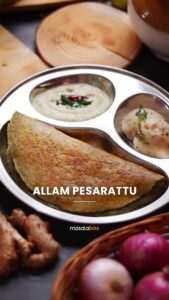 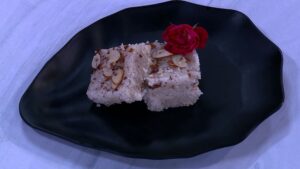 Gulab Pak: A Healthy And Refreshing Mitha or Dessert

Gulab Pak recipe is a delicious mithai/ dessert made with a base of danedar mawa/khoya and desi or organic dry rose petals. This fragrant 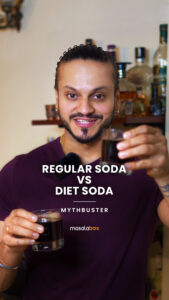 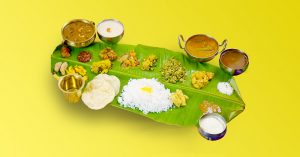 Vishu is one of the times when Malayalees anticipate for that perfect Vishu Sadya! A Sadya is a plethora of veg curries that are spread 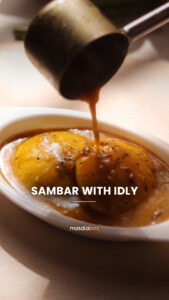 How to make sambar.

1. In a kadai heat, 2 tsp of oil, add mustard & methi seeds, a few curry leaves and a pinch of asafoetida and let it splutter.
2. Add shallots and chillies and saute for a minute till it changes colour.
3. Add tomato and continue to cook till tomatoes soften.
4. Add mixed vegetables and saute for 2 minutes.
5. Further, add ¼ tsp turmeric, ½ tsp jaggery, 1 tsp salt and 1 cup water mix well, cover and boil for 10 minutes.
6. Add ¾ cup tamarind extract and mix well. Cover and boil for 10 more minutes.
7. Add boiled toor dal and water mix well, and let it simmer on low flame until the flavours are well absorbed.
8. Add in 2 tbsp coriander leaves and mix well.
9. Enjoy the sambar with hot steamed idli.